Conduct an Internet search for the phrase "food safety culture," and you will find many articles discussing the importance of keeping the food supply chain safe and developing an environment that appropriately supports food safety practices. In 2018, the Global Food Safety Initiative (GFSI) published a position paper, "A Culture of Food Safety," to address why companies should do this and how they might approach it while acknowledging that "regulation is not enough."

Lean manufacturing philosophy and practice was partly based on Henry Ford's manufacturing systems and was more thoroughly developed post-World War 2 at Toyota Motor Company. The practice eventually came to be known as the Toyota Production System. Lean manufacturing was introduced to the U.S. in the early 1990s through John Shook's book, The Machine That Changed the World.

The word "lean" is not a direct translation of the system in place at Toyota, and in some ways has become an unfortunate moniker, as companies have co-opted the practice to "lean out" their organizations by reducing staff and generally managing in a non-lean way. I have read that a more accurate translation of the original name for the Toyota Production System is "fully engaged people," which is interesting as the connotations of this translation are completely different. They hint at a system that appreciates the importance of people in an operation; in fact, respect for people is at the core of Toyota's Production System.

If "yes" is the answer to most of the questions above, then there is a good chance your project or initiative went well. If you answered "no" to many of these items, then it may not have gone as smoothly.

We have all heard the saying, "be the change you expect to see." If you are a leader or manager, then this tenant is at the core of transforming your company's food safety culture. To engage people in a food safety culture, as leaders, we must be the first ones who are engaged. What does it mean to be engaged as a leader? What does it look like in practice? The principles of lean suggest that leaders start with using observation and listening to improve their understanding of the problem. Then, leaders should engage with their team to make improvements based on these learnings.

The case study below shares how this was applied at a company engaged in an employee safety culture transformation.

The Importance of Clear Communication

Several years ago, we worked with a company that wanted to improve employee safety culture. The company was consistently having a higher number of recordable injuries than other companies in its industry peer group. The CEO was committed to changing this and asked for guidance to make this happen.

We started the project by working with the CEO to establish a measurable company objective around safety and to communicate that goal clearly to everyone. Improving workplace safety would be the most important initiative that year, and the CEO wanted employees to know that she was serious about this goal to the point that people should stop work if something was not safe. She communicated this in the all-company meeting and in the company newsletter. After the initial communications, the CEO made a point of listening and observing in daily meetings to see how often safety came up in conversation, which led her to work with her teams to ensure that safety was the first agenda item of every meeting and that she, herself, was talking about it throughout the day.

One of the most critical things the CEO did was to use a lean tool called "Gemba walks." Essentially, she walked the floor daily and made sure that all the vice presidents, directors, and managers reporting to her did the same. On her walks, she talked to people, asked questions, and listened. Questions she asked included: "What is happening today?" "What could be going better?" "What is getting in your way?" "What new solutions are you trying?" "Do you need anything from me?" "When can I check back with you?"

In the beginning, employees were reticent about sharing. As the presence of the CEO and other leaders became a regular occurrence, however, people realized that their issues and ideas would be acted on and supported, and they began sharing more. After a couple of months, employees began to approach leaders when they saw them out on the floor. Ideas for improvement were raised, along with issues and problems.

By engaging in Gemba walks and daily "standup" meetings, the CEO and company leaders learned that one major problem was getting safety issues addressed. Leadership decided to change the role of the safety team. They recruited employees from every department to be on the safety team and made sure that supervisors and managers freed up time so that employees could attend safety meetings.

The safety team's mandate was to devise a way to get feedback from employees about what was not safe, and then create a process to address the issues as they came up and report back to employees and leadership about what actions had been taken (Figure 1). Safety training was provided to all employees, and safety metrics were incorporated into the department daily standups. The safety team now had a specific role to take actions around safety issues, and supervisors and managers had a specific role to participate in safety initiatives and training with their teams.

FIGURE 1. The Safety Team was Tasked with Collecting and Implementing Safety Ideas Submitted by Employees 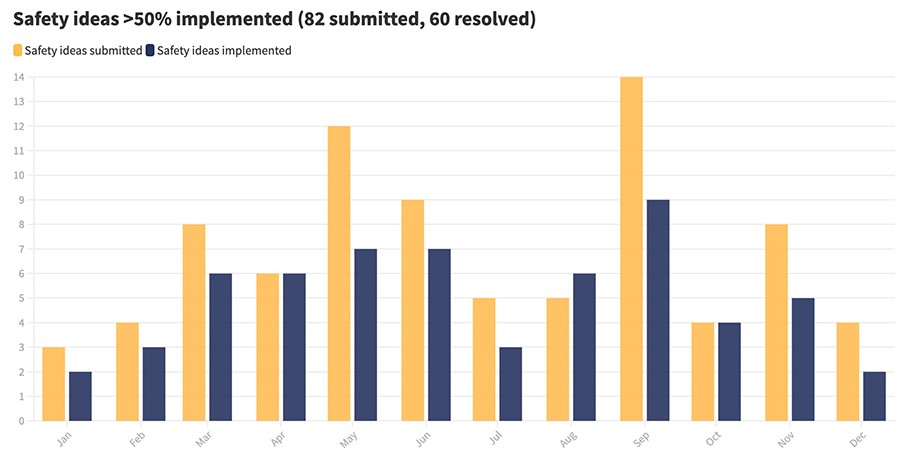 One challenge the company faced was around decision-making, especially amid conflicting objectives. Previously, employees had believed that meeting production numbers was more important than safety. This was reinforced by the fact that employees were required to complete all of the scheduled production on a given day, even if that meant working 4–5 hours of overtime. Little incentive existed for employees to stop production for a safety issue, even with the CEO reinforcing the importance of safety. By stopping production, employees would be making their jobs harder.

To change this thinking, the CEO needed to address the sticky issues at the root of the production inefficiencies, which included forecasting, production scheduling, and equipment issues that were combining to reduce productivity.

Creating an Environment that Supports Problem-Solving

Some of the problems on the floor could be solved by employees on their own. This required teaching problem-solving techniques to employees and providing them with the time, resources, and encouragement to solve those problems. Employees were trained in five "why" and cause-mapping problem-solving techniques, and presented with particularly challenging problems. In this way, the root causes were identified, and the solutions and implementation came from the floor for many of the problems.

However, initial solutions from the teams did not always work as planned. The CEO needed to ensure that teams understood their ideas might not work and that it was fine to go back to the drawing board to try again. This required the CEO to be connected with the problem-solving teams and to understand, at a high level, the progress of different problems.

In the case study above, we used an employee safety culture initiative rather than a food safety initiative; however, the same principles apply when addressing food safety culture. To affect a lasting, sustainable transformation to company food safety culture requires leaders to model and support the actions they expect to see in their employees. This is not a new idea. As food safety professionals and leaders in our companies, we can do a better job of embracing our roles as change agents and work to focus on the actions that will result in lasting changes to the way our teams operate. Why transform your culture in the first place? In the case of the company above, it was able to reduce employee incidents to less than one per year through these efforts. At the same time, it identified and fixed many issues that were slowing down production.

If you are a leader, what gets in the way of fulfilling this role? Is it a lack of time, looming deadlines for reports and paperwork, too many meetings to attend, fear of walking the floor and not knowing what questions to ask, or not understanding how to begin an initiative like this? These are some of the reasons I have heard from leaders. If you embark on a project that engages your people and transforms your culture, you will make some mistakes, and they may be tough to overcome; but what is the consequence of not engaging your people or working to transform your culture? Nothing. Nothing changes, and you get the same results as always.

If you are ready to make a change, what happens next? One element of engaging people is creating an environment where they feel safe to try new ideas and potentially make mistakes. This means that, as a leader, you must begin to create this environment by showing that you are not afraid to try a different path and make a few mistakes along the way.

Imagine if passing your Safe Quality Food (SFQ) or BRC Global Standard for Food Safety audit meant just scheduling the auditor to visit, instead of having to spend a month before the audit cramming in repairs and training to ensure that everything is up-to-date and in compliance. Imagine not having to put product on hold for quality or food safety non-conformances, ever. Imagine that your employees proactively point out and improve areas where food safety could be at risk. How great would life be if that was the environment at your facility? This could be you.

How Do I Transform My Food Safety Culture? Start Small.

Teri Danielson is the Owner and primary Consultant of Northwest Food Solutions LLC in Portland, Oregon. She has 30 years of experience in food and beverage manufacturing and supply chain management, food safety, continuous improvement, and project management. She has demonstrated experience working with teams and engaging people to create safe, productive workplaces.

Teri Danielson is the Owner and primary Consultant of Northwest Food Solutions LLC in Portland, Oregon. She has 30 years of experience in food and beverage manufacturing and supply chain management, food safety, continuous improvement, and project management. She has demonstrated experience working with teams and engaging people to create safe, productive workplaces.