By Bảo Thy Vương Ph.D.

Foodborne illness contracted from eating seafood, in particular fish, frequently occurs in coastal areas of the author's home country of Vietnam. In July 2020, two separate incidents of food poisoning were reported in a coastal district, caused by eating red snapper caught in coastal areas. The 23 victims were hospitalized with symptoms of fatigue, abdominal pain, nausea, vomiting, diarrhea, arrhythmia, and bradycardia.

According to a report from the Administration for Food Safety and Hygiene Department, which is part of the Ministry of Health, an ensuing investigation showed that consumption of red snapper had led to the foodborne illness cases. The investigation team took samples, including two uneaten slices of fish from the patients' houses (comprising approximately 200 grams) and one whole red snapper weighing 2,500 grams. The fish samples were frozen and sent to the Institute of Oceanography to definitively identify the fish species and check for ciguatera toxin (ciguatoxin) on the samples.

In August 2020, the Institute of Oceanography reported that the sample of sliced red snapper had a ciguatera toxicity of 6.25 mU/100 g, while the sample of whole red snapper had a ciguatera toxicity of 3.25 mU/100 g. Ciguatoxins are problematic, as they are heat stable and are not destroyed during processing or cooking. They are identified by a number of benthic microalgae species that often live on algae or seaweed in coral reefs. Herbivorous fish species can accumulate this toxin when they consume this algae or seaweed. Predatory fish and other, larger organisms in the marine food chain will accumulate these toxins when eating the smaller fish that have been contaminated with ciguatoxin. In this way, the ciguatoxin is transferred to a higher level of the marine food chain, creating the risk of foodborne illness in humans who consume these fish.

Red snapper (Figure 1) tend to live around coral reefs, where there is a high risk of accumulation of ciguatoxin. In addition, other marine animals such as grouper, snapper, tuna, and sea eel can be contaminated with this natural toxin. The exact composition of the ciguatoxin depends on the coastal area where the red snapper live, and the toxin load varies between individual fish. Toxins accumulate in the liver, intestines, head, and eggs of fish. 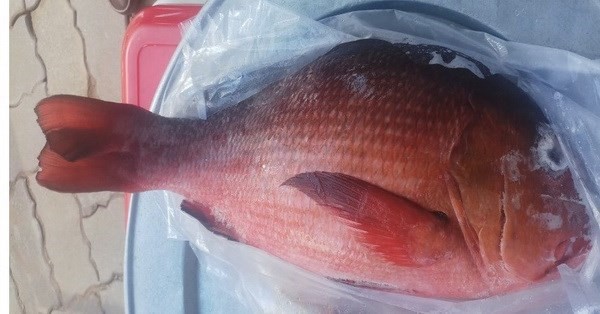 Ciguatera poisoning is one of the most common forms of seafood poisoning. The ciguatera toxin is especially dangerous because it does not break down under high heat during cooking. To prevent foodborne illness from ciguatera toxin, raw seafood should never be consumed, and the head, eggs, and liver of fish that live in warm waters should be avoided, as ciguatera toxins are often concentrated in these parts of the fish. Awareness of ciguatoxin poisoning should be increased for at-risk populations living in warm, coastal areas. From a clinical point of view, victims of this foodborne illness should avoid eating seafood, drinking alcohol, or eating fatty nuts such as peanuts, cashews, etc., after ciguatoxin poisoning.

Although large, carnivorous fish are known to be the most frequent causes of ciguatoxin poisoning in humans, it is difficult to predict the effect that climate change will have on ciguatoxin accumulation in herbivorous reef fish and their predators. Warmer temperatures are altering growth rates and patterns for algal blooms, seaweed forests, and the coral reefs in which the fish live, which poses challenges for food safety professionals and public health officials in mitigating and addressing illnesses caused by ciguatera toxin.

Dr. Bảo Thy Vương is Head of the Health Sciences Faculty at Mekong University in Vietnam. Her research interests include food safety, public health, and nutrition.