If employees aren’t clean, product won’t be either. Simply put, sanitation starts and ends with employees. How do companies maintain high standards when they likely experience high employee turnover?

“This training cover topics such as hand washing and proper personal protective equipment (PPE) use,” says Rafael Rivera, manager food safety and production programs at U.S. Poultry and Egg Association, based in Tucker, Ga. “PPE not only works to protect people from injury, but it also ensures the protection of product. Wearing gloves, for example, prevents cross contamination from your hand to the product and vice versa.”

Many plants have locker rooms where employees can change into corporate-provided uniforms. “They have to change into uniforms and/or put on protective clothing,” says Mel Kramer, Ph.D., CEO at EHA Consulting Group, based in Baltimore, Md. “Oftentimes, they keep their own clothes on underneath as long as there are no tassels or earrings that can contaminate food.”

Employee garments are controlled by the plants. In general, workers wear gloves, plastic disposable sleeves up to the shoulder, hair nets and beard nets. “Many people may decide to wear the beard net today, but they can also shave their facial hair,” Kramer says.

Then, before employees enter the plant, they wash and sanitize their hands, Kramer says. “Some plants have foamers that cleanse boots when workers walk into the processing area,” he says.

Of course, when slaughterhouse employees end their shifts, for example, they would also walk through foamers to clean liquid and solid waste off their uniforms, Kramer says.

To prevent cross contamination, programs also exist for washing garments and having disinfection stations where a person can clean and disinfect gloves, Rivera says.

“There may be programs where you change PPE at different intervals during the day,” he says. “Plants also use color coding ... Plants need to minimize personnel movement across the plant. Most need to stay in their area of work unless they’re needed somewhere else.”

For example, having aprons or hairnets of a certain color for each area helps identify employees’ areas of work.

“Limiting personnel movement across the plant prevents having people intended to be located in a second processing area — working with almost finished product — from going to an area like evisceration, where the product is still in the process of being cleaned and can potentially bring pathogens into an area where these may be already under control,” Rivera says.

To ensure compliance, supervisory protocol dictates that everything is documented and monitored by cameras, says Kramer. “Plants have signage in bathrooms about washing hands,” he says. “But there is also signage about hand washing after any ‘un-clean act.’”

Compliance issues may be contributed to cultural differences. “Due to differences in cultures, signage in plants is in two to three languages — usually English, Spanish and Vietnamese,” says Kramer.

Employee turnover is also a challenge, and that’s why constant training in all languages is always needed.

“Providing training in the employees’ native language is also important, and there is very little information out there,” Rivera says. “USPOULTRY has a commitment to providing bilingual training in English and Spanish at the very least, but we have also developed training on other languages beyond these two that are mentioned, as well.”

In addition, plants should take employee health seriously. “No one wants workers who have had diarrhea, vomiting and coughs on the line,” says Kramer. NP

What does the government say about employee hygiene? Surprisingly, not much. 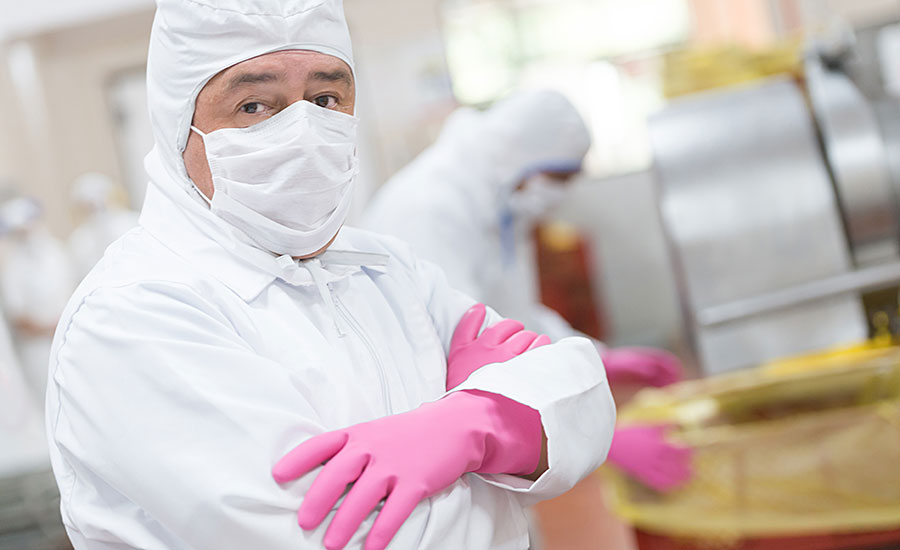 “The lingering challenge is … FSIS enforcement of the performance standard ‘prevent adulteration of product and the creation of insanitary conditions,’” from 9 CFR 416.5, says Michael Fisher, DVM, food safety and sanitation consultant for Anfractuous.org and retired FSIS employee in Council Bluffs, Iowa.

The performance standard does not require ideal conditions — only conditions sufficient to prevent adulteration of product and the creation of insanitary conditions, Fisher says.

“With respect to cleanliness and clothing, establishments should strive for employees to start the day ideally clean,” he says. “Some inspectors interpret the performance standard as requiring employees to maintain ideal conditions all day, which is incorrect. Such inspectors can drive an establishment nuts, constantly alleging 9 CFR 416.5 noncompliance because an employee rinsed blood from their hands with cold water and did not wash with soap and water, or because the employee’s outer clothing is stained.”

Unclean employees result in adulterated product. “As FSIS continues to mature its implementation of 9 CFR 417, the ability of an establishment to maintain 9 CFR 416.5 compliance becomes a prerequisite condition supporting a hazard analysis determination that a food safety hazard is not reasonably likely to occur at any step in the process where employees handle product,” Fisher says.

Given the emphasis FSIS places on records, “I encourage establishments to maintain a basic employee hygiene SOP, monitor implementation of that SOP and document the monitoring,” Fisher says. “The monitoring document becomes a 9 CFR 4175(a)(1) supporting document for such a determination.”

This article was originally posted on www.provisioneronline.com.
KEYWORDS: employee hygiene

Megan Pellegrini is a contributing writer.
Subscribe For Free!

One Serving of Freshwater Fish Equivalent to Drinking PFAS-Contaminated Water for a Month, U.S. Study Finds