Adoption of New Ideas and Technology

As managing food safety changes, European cultures have mixed attitudes toward the adoption of innovation and new technology, forming a bell curve pattern with the "early majority" (people who are slow to adopt after the latest release) and the "late majority" (people who are trying to catch up with technology trends) standing the bulk stem, whereas the venturous "innovators" and the resistant "laggards" trail at the two ends (Figure 1). The live poll result forms a slightly skewed bell curve toward "innovators" (Figure 2).

Countries of profound history and those constituting the cornerstone of fundamental microbiology tend to be the late adopters of innovation—for example, France, Germany, UK, and the Netherlands. On the other hand, countries bearing little tradition or history in microbiology, such as Italy, Turkey, and Switzerland, tend to be the early adopters of technology and are more willing to become innovators.

While early adoption can bring vast opportunities, such as the case of Bitcoin, in which early adopters have made tremendous profits by trading cryptocurrency before the trend started, such action is not without risk. In the case of the Y2K bug (a data format issue) in early home personal computers, the U.S., being an early adopter of home computers, paid $150 billion to fix the issue. Other countries that adopted the technology almost a decade later did not suffer the Y2K problem or its investment, as the bug had been resolved.

In the context of food safety culture, people must be mindful about the cultural backdrops and differences in approaching technology, and respect other positions, especially those of late adopters. In opening up conversations around information technology (IT), data is key to communicating, assessing new ideas, and demonstrating the value of new IT solutions on business performance. Diversity in IT perspectives from different functions and countries should also be considered to prevent stagnancy.

FIGURE 2. Distribution of Webinar Participants by Level of Adoption of New Ideas and Technology 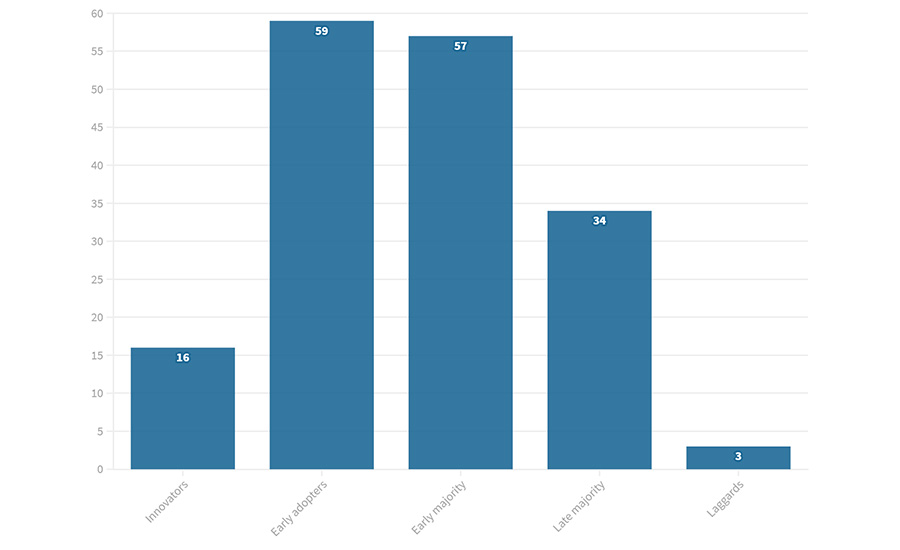 In European countries, there is a strong tendency to involve people upfront. Employees are encouraged to take ownership of food safety. In formulating and developing its global quality program, iCare, Paris-based Danone (branded as Dannon in the U.S.) aims to define and assess "culture of quality," explore how to drive a strong culture of quality, establish what iCare brings to the company, and strategize next steps.

A key motivation of Danone's quality ambition is to better engage its people and transform their attitudes so that everyone takes part in delivering the company's quality vision to its customers. Indeed, employee ownership and peer involvement make up two of the four drivers of the program, highlighting the importance of each member's ownership in the continuous improvement of the business. The remaining two drivers, message credibility and leadership emphasis, are discussed in the "Consensual decision-making" section below.

Additionally, the program framework mapped out customized tools to ensure that all teams complete their work properly, thereby enabling people to take responsibility and make a difference.

More remarkable is Danone's commitment to structure iCare to adapt to different countries' local situations so that the guidance is relevant and effective. In the Poland business units, for example, a local roadmap in achieving the Danone quality ambition was developed that is unique to the country's reality and culture. A cross-functional team was elected and empowered to carry out the local activation of the global program.

During the selection of enabling tools, opinions and inputs from all of the management departments, including finance, human resources, and general management, were sought. Many of the managers were initially surprised that they would need enabling tools and a culture of quality. The training related them to this journey and inspired them to contribute to building Danone's quality culture. They also sought to engage people differently. Managers established a five-minute pre-work kickoff to describe how everyone could best contribute, along with a dedicated annual World Quality Day to educate everyone in the business about quality culture. Managers aimed to inspire quality culture along the entire value chain on this day.

Furthermore, in promoting the behaviors of individuals supporting quality culture, a competition named "iCare six-star program" was initiated. Under the iCare six-star program, people from different departments, all with a focus on the frontline, were engaged in various activities to celebrate good food behaviors and quality culture. Notably, special sport activities were the main form of celebration and recognition in Poland; barbecues and other activities, while not popular in Poland, are possible in other suitable cultures. During the COVID-19 pandemic, the face-to-face training was moved online using tools available in the organization. It is a learning process for the business to enrich the way of how the organization works.

Quality is embedded in everyone. Company-wide engagement must result in a culture; activities in culture should, in turn, lead to improvement in performance. In attaining the company's vision, thriving to consistently apply a global food quality program, and achieving concrete results, people should be able to discern if their key performance indicators (KPIs) are the right ones to measure performance and achievement. Moreover, flexibility in local adaptation and activation, via addressing the diversity in cultures and ethnicities, is crucial for building food safety and quality ownership, empowering people, and maximizing employee potential in the European context.

Danone's quality ambition and program rely heavily on cross-functional efforts, insights, and decision-making. The overarching company vision in quality is specified in its strategy, governance, and leadership emphasis. Message credibility on cross-functional vision, strategy, and consistent messaging are also critical to its program framework, enabling alignment from the top down (see "Introduction to Global Food Safety Culture," Figure 11).

As previously discussed in "Employee ownership," the Poland business units were given an empowered, cross-functional team to plan their customized program roadmap. Planning involved not only the food safety and quality team, but also finance, human resources, and other departments. This quality culture program, being a worldwide network, is pivotal for collecting feedback for further opportunities and improvement. In other words, people are more likely to actively participate in influencing business decision-making, and the business structure enables them to do so. Meanwhile, recalling that almost 68% of the webinar audience considered that their food safety decisions were made "too slowly" (see "Introduction to Global Food Safety Culture," Figure 31), it is worth noting that the consensual process inevitably slows down the decision-making process.

In general, food safety culture in Europe tends to possess a strong internal drive within the company and/or industry, as opposed to regulatory dictation. As discussed in the sections above, employee engagement and empowerment, and the consensual process of decision-making, are crucial factors prompting a business to self-regenerate and be more self-reliant.

Danone's case sets an apt example of internal drive fostering quality culture through a global program that allows for local adaptation. The differences in the willingness to adopt new ideas and technology underscore that it is internal drive, rather than regulatory dictation, that is more relevant to food safety culture discussion in European cultures.

In Part 3 of this Regional Culture article series, to be published in the April/May issue, we will examine food safety culture in Australia.

Lone Jespersen is a principal at Cultivate, an organization dedicated to helping food manufacturers globally make safe, great-tasting food through cultural effectiveness. She has significant experience with food manufacturing, having previously spent 11 years with Maple Leaf Foods. Dr. Jespersen is also a member of the Food Safety Magazine Editorial Advisory Board.

John David is Global Scientific Marketing Manager at 3M. He holds a master's degree in molecular biology and genetics and a bachelor's degree in biological sciences, both from the University of Delaware.

Sophie Tongyu Wu is a Senior Research Assistant at University of Central Lancashire and a member of Cultivate SA. She leads a food safety culture improvement project at ten UK food manufacturing companies to collect organization-wide feedback for targeted action. Dr. Wu holds a Ph.D. in food science and technology from Purdue University and a bachelor's degree in biology from the University of Wisconsin–Madison.

Lone Jespersen is a principal at Cultivate, an organization dedicated to helping food manufacturers globally make safe, great-tasting food through cultural effectiveness. She has significant experience with food manufacturing, having previously spent 11 years with Maple Leaf Foods. Dr. Jespersen is also a member of the Food Safety Magazine Editorial Advisory Board.

John David is Global Scientific Marketing Manager at 3M. He holds a master's degree in molecular biology and genetics and a bachelor's degree in biological sciences, both from the University of Delaware.

Sophie Tongyu Wu is a Senior Research Assistant at University of Central Lancashire and a member of Cultivate SA. She leads a food safety culture improvement project at ten UK food manufacturing companies to collect organization-wide feedback for targeted action. Dr. Wu holds a Ph.D. in food science and technology from Purdue University and a bachelor's degree in biology from the University of Wisconsin–Madison.