All eyes are on Canada as it facilitates the required processes to establish a safe, structured, reliable environment for legal cannabis businesses.

On October 17, 2018, Canada nationally legalized medical and recreational cannabis use for adults. In doing so, that country has set the stage for significant R&D of legal cannabis edibles and beverages—often with the help of U.S. investors.

Canada will also attract significant attention from American cannabis industry pioneers, regulators and others as the U.S. considers its path in the wake of ongoing state-by-state legalization—and the associated regulatory underpinnings.

According to the Arcview Market Research & BDS Analytics report, “The State of Legal Marijuana Markets,” worldwide legal cannabis spending hit $12.2 billion in 2018 and is projected to grow 38 percent to $16.9 billion in 2019. This is a significant jump from $9.5 billion in 2017.

When dialing this down to the U.S. market for legal medical and recreational edibles and beverages, growth projections are likewise impressive. Grand View Research has reported that edibles and beverages accounted for sales of “nearly $1 billion” in the U.S. during 2017 and will grow to $4.1 billion by 2022.

But for the time being, in the absence of a national structure for legal cannabis business in the U.S., many larger investment opportunities for market growth have been lost to Canada—and Uruguay, which has also passed federal cannabis legislation.

Canadian legalization is putting pressure on the U.S. legal cannabis edibles and beverages market to affect change at a national level. “If the U.S. wants to continue to have a place at the table in the cannabis industry, it will need to make sure that many of the companies that exist here are able to compete in an international market,” says Kim Stuck, founder, Allay Cannabis Consulting LLC, Denver.

“Canadian legalization has countless and untold meaning and impact on the U.S. legal cannabis market,” says Ben Gelt, board chair, Cannabis Certification Council, Denver. “One of the more immediate and broadly felt impacts is the access to capital that full federal legalization in a developed economic society has. In short, many large American companies are buying or merging with Canadian companies to establish provenance in Canada in order to access its federal banking system and capital markets.”

As the Canadian market for legal cannabis edibles and beverages continues to grow and mature, U.S. counterparts will have a watchful eye on its progress.

Many U.S. cannabis industry leaders have recommended that legal edibles and beverages companies look to FDA guidelines when establishing good manufacturing practices (GMPs), HACCP plans and QA/QC structures. However, this still comprises an informal approach for companies looking to go above and beyond state regulations in order to adequately prepare for wider-ranging—and potentially national—business growth.

But how regulatory oversight plays out in the U.S. is yet to be determined. “I believe the U.S. is going to go through its own spin cycle before it settles on a nationwide regulatory approach,” says Tom Newmaster, founder and owner, FORCE pkg, Myerstown, PA. As of early 2019, 10 states and Washington, D.C.—as well as the Northern Mariana Islands (a U.S. commonwealth in the Pacific)—have legalized recreational and medical use of cannabis, and 23 additional states, plus Guam, Puerto Rico and the U.S. Virgin Islands, have legalized medical use. But everyone is largely operating independently. “Once we go national, they’re all going to have to sync up.”

And while Canada has officially legalized cannabis in the country, how the industry operates is more nuanced than that “big picture” story suggests, notes Newmaster. “Regulations vary widely by province. For the most part, the provinces regulate things like wholesale, retail and consumption locations, while the federal government has control over possession limits, advertising, product type, medical cannabis, cultivation and processing. The legal landscape is still a bit rocky, and there are inconsistencies that could lead to court challenges.

“It’s fair to say that the U.S. has its work cut out for it, and Canada’s regulatory journey is probably still a work in progress,” continues Newmaster.

Meanwhile, Canada has begun work to establish standardized manufacturing protocols for legal cannabis edibles and beverages via Health Canada. The federal agency is working to set standards so that edibles and beverages can be ready for retail sale by its deadline of October 17, 2019, one year after it implemented federal cannabis legalization. Third-party certification companies are likewise hard at work establishing edibles HACCP plans to help guide producers.

Newmaster notes that the proposed Canadian regulations for edibles currently include the following stipulations:

Establishing regulatory and inspection control within Health Canada will help companies developing edibles and beverages succeed, notes Stuck. “Having a regulatory body that has science, health and safety knowledge will greatly improve the safety and consistency of products. They also have been regulating cannabis for a while in most provinces at a local level, so the regulators in Canada aren’t walking into this blind. They paid attention to the industry; they didn’t choose to ignore them. Instead, they listened to what the consumers and the industry needed form the beginning, and now they have some kind of regulatory base to stand on.”

Within this framework, Canada will address the inherent challenges posed by this market. “Those challenges include quality-control requirements, testing issues, environmental challenges and many more,” says Gelt. “Everybody is learning as they go, and everyone can stand some learn from others’ successes and failures.”

This process will take some time. “It’s likely that there will need to be many significant changes—and potentially outright disruption—to establish the necessary QA/QC, food safety and required laboratory testing to truly ensure public safety,” says Gelt.

U.S. states should view development of legal cannabis edibles and beverages in the same way companies view development of regular products—particularly when it comes to food-safety protocols. “The sooner that cannabis is treated like any other agricultural product going to market, the better off markets will be,” says Gelt. “Simply said, predictability is a buoy for businesses in a volatile world.”

While Canada has plenty of room to improve its system of oversight, the country is off to a good start. “There are always ways to improve, but—for the most part—they are doing a good job,” says Stuck. “They have testing that is more extensive than most places in the U.S. Canada’s online guidance for licensees is easy to understand and find online. Most people in this industry are not maliciously trying to be out of compliance. Usually, it’s due to a lack of resources and information.”

Stuck advises that regulatory bodies need to listen to, and learn from, the cannabis industry. “The more they understand about the industry and the processes within it, the better they will be able to create regulations that are relevant in order to support cannabis businesses and ensure safe products for consumers.” 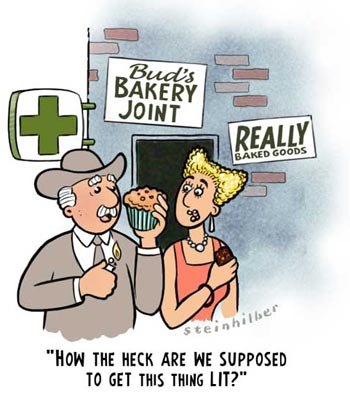 As U.S. producers look to set up standardized, safe operations, they should look at existing food, beverage and alcohol categories for guidance, including for labeling, notes Newmaster. “Cannabis brands shouldn’t try to re-write the rules. Simply build on the examples that are already there. An edible cannabis product is food, so it should comply with all of the existing food regulations guiding the production and labeling of those products.”

Labeling should be clear and informative. “If your product has CBD or THC ingredients, your labeling will have to reflect those claims, similar to gluten free, non-GMO or organic claims,” says Newmaster. “And, like any other consumer health-care or supplement product, there should be guidelines for what claims/benefits can made and how they are communicated on the packaging.”

As cannabis edibles and beverages continue to enter into mainstream U.S. culture, forward-thinking transparency will foster growth. Newmaster reminds us that cigarettes have only had warning labels since 1965. “Hopefully we can build upon the lessons of the past.”

Until recently, there weren’t any Nutrition Facts on beer products—and they still aren’t required. But in January 2019, AB InBev announced that Bud Light would be voluntarily listing ingredients and Nutrition Facts on labels, and making it part of its marketing and advertising. “They’re following the look of the standard format found on other food and non-alcoholic beverages in the U.S.,” says Newmaster. “Cannabis should follow this lead and be as transparent as possible. I believe that their main target consumer cares about the ingredients and nutritional values more than most consumers.”

“My belief is that today’s political hunger for the multi-billions in taxes that cannabis can deliver will ultimately win over,” says Newmaster. “Whatever happens in Canada will help move the U.S. in the right direction. We can look at them as a test market.”

Newmaster notes that this will likely include import/export business strategies. “We trade all kinds of products, so who’s to say that someday there won’t be cannabis products made available across borders? Whoever produces a better or a cheaper brand could have the winning hand. My guess is that one day, there will be a global market for cannabis.”

This topic increasingly hits the world stage. The World Health Organization (WHO) is reportedly gearing up to recommend reclassifying cannabis so that it’s no longer grouped together with substances considered potentially dangerous and that have limited to no health benefits. WHO will also reportedly clarify that CBD products with no more than 0.2 percent THC do not have any international restrictions.

Meanwhile, Uruguay, the only other country to nationalize legal cannabis to date, with federal legislation passed in 2013, already has its eye on developing medically focused cannabis products, including ingredients, for export—and it’s getting some help from Canada. In October 2018, Aurora Cannabis, Edmonton, acquired ICC Labs based in Montevideo, Uruguay. The impetus behind this move is reportedly to establish a Latin American foundation to capitalize on the global CBD health and wellness market—an aspect of the legal cannabis edibles and beverages market that holds tremendous potential.