Use of Microorganisms in Dairy Flavors

Benefits of fermentation include enhanced safety through acid and alcohol production; production of bacteriocins; and removal of toxic components. Nutritional value also can  be enhanced through fermentation along with improved digestibility and flavor.

“Milk is sterile at secretion,” explained Farshid Eftekhari, technical director, Gamay Foods, “but is soon impacted by lactic acid bacteria, coliforms, spoilage organisms and pathogens. Lactic acid bacteria can be divided into two groups, based on the end-products of glucose metabolism.”

Those that produce lactic acid as the major product of glucose fermentation are designated homofermentative; and those that produce equal amounts of lactic acid, ethanol and CO2 are termed heterofermentative. All members of Pediococcus, Lactococcus, Streptococcus and Vagococcus, along with some lactobacill, are homofermenters; while Carnobacterium, Oenococcus, Enterococcus, Lactosphaera, Weissells, Lecconostoc and some Lactobacilli are heterofermenters. 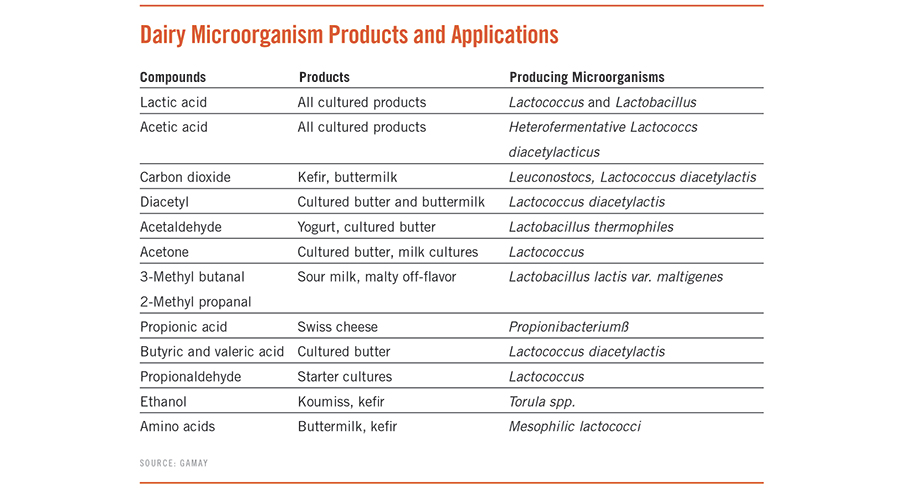 The primary function of lactic starters is the production of lactic acid from sugars, but may also include flavor, aroma and alcohol production; proteolytic and lipolytic activities, and inhibition of undesirable organisms. The chart above shows the compounds produced by various dairy cultures in dairy products.

According to Eftekhari, the heterolactics are more important than the homolactics in producing flavor and aroma components, such as acetaldehyde and diacetyl. Lactic acid bacteria are mesophiles, meaning they generally grow over a temperature range of about 10-40C (50-113F) and have an optimum temperature between 25-35C (77-95F). Most can grow in the pH range from 4-8, although some as low as 3.2 and as high as 9.6.

“Traditionally, the fermenting organisms come from the natural microflora or a portion of the previous fermentation,” Eftekhari explained. “Natural microflora can be either inefficient, unpredictable or destroyed during pasteurization. A starter culture can provide specific characteristics in a more controlled and predictable fermentation.”

The primary function of lactic starters is the production of lactic acid from sugars. Defined strains are available frozen in pellets or cans, and in freeze-dried powder. Starter cultures also function in flavor, aroma and alcohol production; proteolytic and lipolytic activities; and inhibition of undesirable organisms.

People most often are motivated to change their eating habits in order to lose weight, protect long-term health, to feel better or to have more energy, according to a 2016 IFIC Food and Health Survey. Almost half the people surveyed are most interested in weight-loss benefits associated with nutrients in food. Nutrients added to dairy include vitamin D for its benefit to strong bones; omega-3s for their heart and brain health; plant sterols for cholesterol reduction; and conjugated linoleic acid (CLA) for fat loss and muscle health.

“Clinical research indicates that CLA can reduce body fat; improve body composition; increase relative lean body mass; and is not a stimulant. CLA supplements, commercially sourced from safflower oil, are often used for ‘body shaping,’” explained John Foley, technical services, for BASF. The target amount is 3g per day, and the isomers to look for are t10c12 18:2 CLA and c9t11 18:2 CLA.

Americans are looking for health benefits from their foods, including weight management, energy, cardiovascular health, healthy aging, digestive health, plus mental, bone and muscle health. CLA, plant sterols and omega-3s are all viable options to fortify into dairy products and all with allowable claims, helping consumers achieve nutritional goals.

CLA is GRAS for food applications at a usage level of 3g CLA isomers per day. BASF notified FDA and received a “no question” letter in September 2009 (GRN #232). The GRAS notification includes use in soy milk beverages, meal replacement beverages and bars, milk and flavored milk products, and yogurt products. Available in oil, powder or encapsulated form, the target is 3g CLA per day.

Plant sterols or phytosterols, used to reduce cholesterol for over 40 years, are naturally found in vegetables, fruit, legumes, nuts and grains. They are structural homologues of cholesterol, of which approximately 300mg per day are typically consumed and is not enough to lower cholesterol. Primary commercial sources of plant sterols are soy and wood (tall oil). Both qualify for an approved health claim and both equally  are effective at reducing cholesterol. Stanols are hydrogenated sterols, and most research indicates that their cholesterol lowering activity is the same.

Omega-3 fatty acids are most effective in mediation of inflammation, therefore important for both heart and joint health. Found in sardines, anchovies, tuna and mackerel, DHA  (docosohexaenoic acid) is highly important in brain and eye development; mediates inflammation similarly to EPA; is preferentially concentrated in the brain; and is a structural component to photoreceptors in eye.

Foley stated, “There is no US legal recommended daily value for EPA or DHA omega-3 fatty acids. However, the Academy of Nutrition and Dietetics recommends 500mg EPA + DHA per day for the general population.”

Available in oils, powders and encapsulated form, omega-3 fatty acids are sourced from fish oil containing 25-35% EPA and DHA; algae products containing only DHA; and plant sources with only alpha linoleic acid (ALA) and a precursor to EPA/DHA—but with a low conversion rate in the human body.

Purity and sensory qualities are most important when adding to foods. An encapsulated version is stable in drinking yogurt for at least five weeks. Any off-notes can be masked with fruit preparations.

This article was originally posted on www.preparedfoods.com.