Mandernach spoke first, opening with information about COVID-19 and the regulatory community. He said that 37 percent fewer inspections were being conducted in July 2020, vs. July 2019, in the U.S., and wondered how many were being completed virtually. Fewer inspections lead to fewer violations. Budget cuts are also having impacts on programs, he said; there will most likely be personnel reductions over the next few months, as well as long-term changes in inspections as a result of COVID-19.

He also revealed that the CDC said that retail food locations are the single most common location for COVID-19 outbreaks, with 80 percent of illnesses being associated with retail establishments.

Tauxe said that due to medical strain across the country, some parts of the country are expecting 6,000 COVID-19 deaths per week, or 850 per day. Also, it is worthwhile to look at patterns that link individual cases and outbreaks together, as some reoccur from the same source.

Kiecker spoke on modernization—in particular, modernizing inspection systems, policies, and the use of scientific approaches. He said it’s about asking “Can we do this better?” and then going from there. Regulation for modernizing slaughter inspections include poultry, swine, egg products, and beef, and some regulations now rely heavily on emerging lab technologies such as whole genome sequencing.

The last speaker, Yiannas, touched on four core elements of the New Era for Smarter Food Safety blueprint. These include tech-enabled traceability; smarter tools and approaches for prevention and outbreak response; new business models and retail modernization; and food safety culture. He also mentioned that there has been progress recently on produce safety.

Q&A with young food safety professionals working in the field 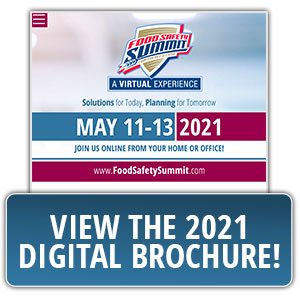