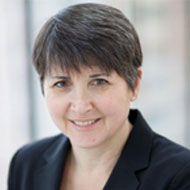 Sandra Eskin was appointed Deputy Under Secretary for Food Safety on March 16, 2021. In this role, Mrs. Eskin leads the Office of Food Safety at the U.S. Department of Agriculture, overseeing the Food Safety and Inspection Service (FSIS), which has regulatory oversight for ensuring that meat, poultry and egg products are safe, wholesome and accurately labeled. Prior to joining USDA, Mrs. Eskin was the Project Director for Food Safety at The Pew Charitable Trusts in Washington, D.C., a position she held since November 2009. She also served as the Deputy Director of the Produce Safety Project (PSP), a Pew-funded initiative at Georgetown University from 2008-2009. While at PSP, she was a senior scholar with the O’Neill Institute for National and Global Health Law at Georgetown University.